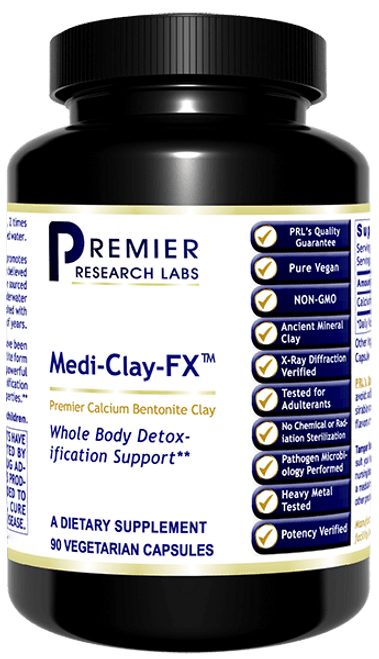 Medi-Clay-FX is superb at removing mycotoxins and heavy metals from the entire digestive tract and our food as well. Mycotoxins are moldy type substances that poison, compromise and can eventually destroy every organ in the body. We are finding this to be an escalating problem in our food supply and in the people we test. We suggest using the Medi-Clay-FX for at least a year and avoiding all foods that contain these mycotoxins.

Food sources of mycotoxins include peanuts and peanut butter (probably the worst), wheat, corn, nut butters & nut milks, alcohol, frozen foods, sugar and hard cheeses. We suggest you google mycotoxins in food to keep abreast of what to avoid.

Medi-Clay-FX can also trap and remove much of the other poisons in our foods including POPS (persistent organic pollutants), glyphosates from GMOs (genetically modified organisms), chemo toxins, inflammatory compounds, cytokines, etc.

Medi-Clay-FX is a quantum-state rare alkaline desert clay. It's not the standard sodium bentonite, but a far superior calcium bentonite. It supports deep-seated whole-body detox. Use with Cleanse Blend and the Premier Cleanse Program.

Clay has a long, worldwide history of outstanding, health-promoting effects and has been used extensively by many cultures for thousands of years. Medi-Clay-FX is a quantum-state, rare desert clay (calcium bentonite) with excellent, proven detoxifying properties.

It has been obtained from a deep sub-surface mine in the southwestern desert area of the U.S. which has been uniquely protected from leaching and being oxidized by the climate. For over 43 million years, this clay deposit has been sealed away from the ravages of natural ele­ments by a crust of zeolite minerals.

Because its excellent adsorptive properties have not been compromised by air or groundwater contaminants, this highly charged, 100% pure calcium bentonite clay has significant drawing power that has proven to be un­surpassed.

Also, the calcium bentonite does not get absorbed by the body at all. It is phenomenal at absorbing toxins from the walls of the digestive system and passing out of the body completely.

Medi-Clay-FX™ provides a rare source of calcium bentonite clay that helps promote detoxification. It contains a unique source of bentonite clay called calcium aluminosilicate. Consuming clay internally has a long history of use with outstanding, health-promoting effects and has been used by various ancient cultures.

Unlike most sodium-based bentonites, Medi-Clay-FX™ contains a rare, freshwater-based bentonite believed to be the only known bentonite sourced from the site of an ancient underwater volcanic eruption that was flushed with fresh water for millions of years. This particularly unique smectite form of bentonite clay exhibits powerful absorptive detoxification properties.

At the outer surface of this clay’s distinctive crystalline structure is a negative electrical charge which characterizes Medi-Clay-FX’s highly effective absorptive qualities. When these negatively charged clay, molecules meet undesirable positively charged particles, the clay’s ions are exchanged with the positive ions of the undesirable molecule. Once the clay molecules’ charges are electrically satisfied, the clay’s absorptive properties, which have a crystal-like composition, act like a sponge and pull these undesirable substances deep into the clay’s inner structure, trapping them until the body is able to eliminate them.

Take 2 capsules, 3 times daily with 4 oz. or more of purified water. Open capsules into about 4 ounces of water and sip from beginning to end of each meal.

Get the latest updates on new products and upcoming sales